Survey How to Get Here Contact Search Blog Order Lookup

What are you looking for?

Founded as a recreational playground far away from the hustle, bustle and smog of Downtown, the idyllic site overlooking the Monongahela River has transformed over the past 12 decades into one of the world’s greatest amusement parks, featuring rides and attractions fit for all ages. Designated a National Historic Landmark in 1987, you’ll find three roller coasters that date back to the 1920s, each as fun as the day they opened nearly a century ago: Jack Rabbit, Racer and Thunderbolt.

Alongside those classic coasters come modern thrillers like Phantom’s Revenge, Exterminator, Sky Rocket and The Steel Curtain, headlining attraction of the new Steelers Country at Kennywood - the first ever theme park area devoted to a professional sports franchise.

Younger guests will rush for the many family-friendly rides, the large and centrally located Kiddieland, and Thomas Town™ at Kennywood. The second-largest permanent Thomas & Friends™ attraction in North America brings five new rides themed to the beloved children’s brand, plus live shows, an indoor play zone, and more.

Whether it’s your first visit or you’re a lifelong Season Passholder, a trip to Kennywood promises unforgettable family fun. Conveniently located about 20 minutes outside of Downtown Pittsburgh, Kennywood is one of Pennsylvania’s best entertainment options for families. Great deals on Kennywood tickets can be found for any budget, and our Group Sales Department is here to help plan an unforgettably fun visit for parties for anywhere from 10 to 15,000 people!

Visiting Kennywood from out of town? Our Lodging Page has great rates on nearby hotels. We also offer special combination packages with our sister parks, Sandcastle Waterpark and Idlewild & SoakZone , and can pair Kennywood tickets with several other popular Pittsburgh destinations for people visiting us from out of state. Contact us today for more details on Kennywood packages for out-of-state residents.

Planning your visit to Kennywood? Contact us with any questions - our team is happy to assist!

At Kennywood, modern thrills meet icnonic traditions that cannot be found anywhere else. We look forward to entertaining your family soon! Our story begins all the way back in 1818, when Charles Kenny purchased the land that would one day become Kennywood. The land became a popular picnic spot during the Civil War era, later referred to as "Kenny's Grove." In December 1898, Anthony Kenny leased the land to the Monongahela Street Railway Company, which created our then small, recreational trolley park. Pittsburgh businessman Andrew Mellon picked the name "Kennywood."

Rowboats on the Lagoon, athletic competitions, pony rides and finding a date in the Dance Hall ranked among the most popular diversions – a far cry from modern theme and amusement parks.

Yet today's Kennywood still contains two major buildings that date back to the 19th century – a carousel pavilion, now Johnny Rockets, and the Parkside Café, initially called the Casino. There was no gambling – the Italian root of the word, "casa," means "home." The park's original layout, with a central Lagoon, also remains mostly unchanged. 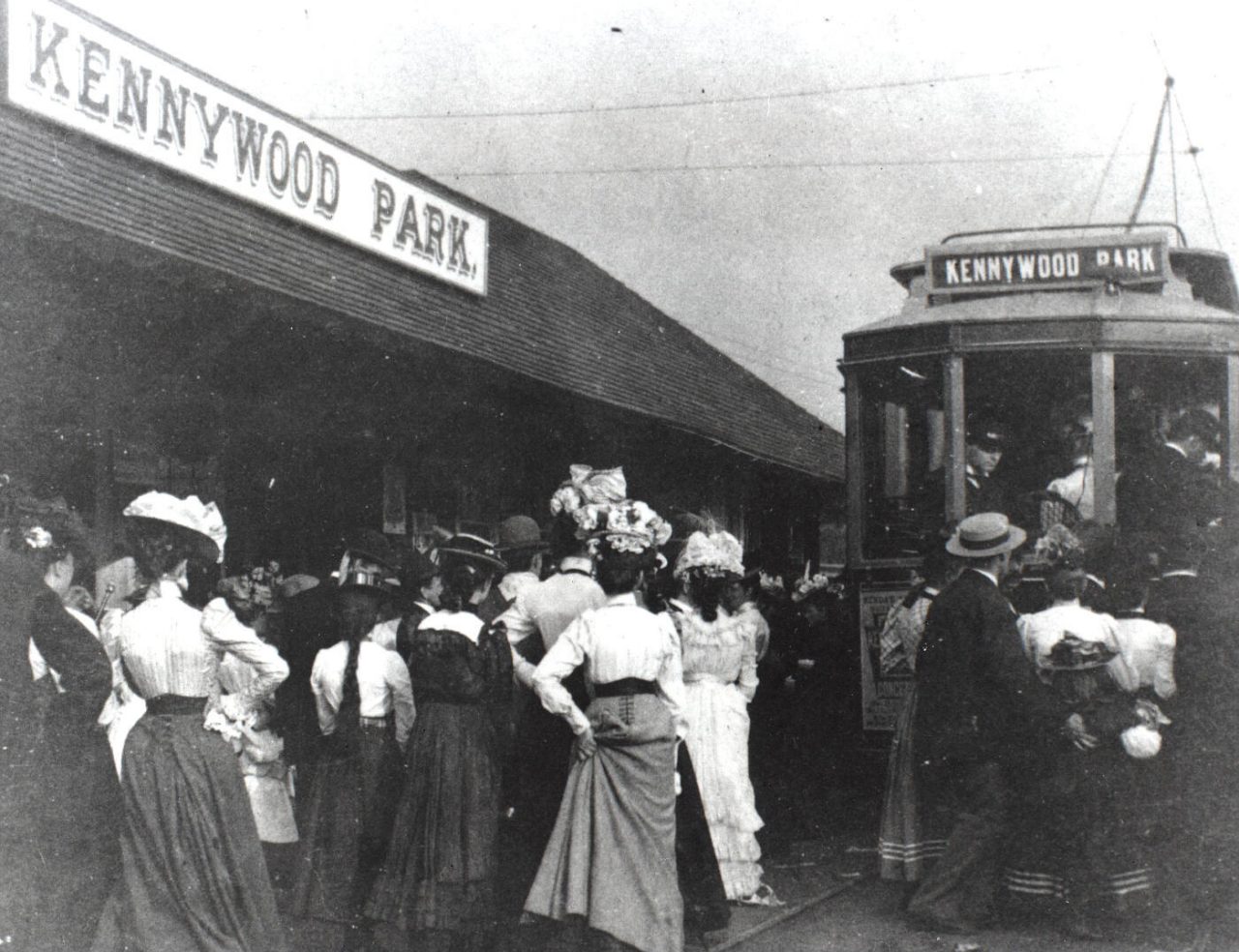 Many important milestones came in those early years. The new century began with the addition of the Old Mill in 1901, Kennywood's oldest surviving ride. Though it's changed greatly, it remains the world's oldest continuously operating dark water ride!

At the turn of the century, Kennywood was engaged in a fierce battle for survival with about a dozen other trolley parks and amusement resorts in Western Pennsylvania. The Pittsburgh (the H was restored to the city's name in 1910) Street Railway Company wanted to get out of the amusement park business in 1902, so it subleased Kennywood to several different operators - until 1906, when the park was sold to two businessmen, A.S. McSwigan and F.W. Henninger, whose families would run Kennywood for the next century. 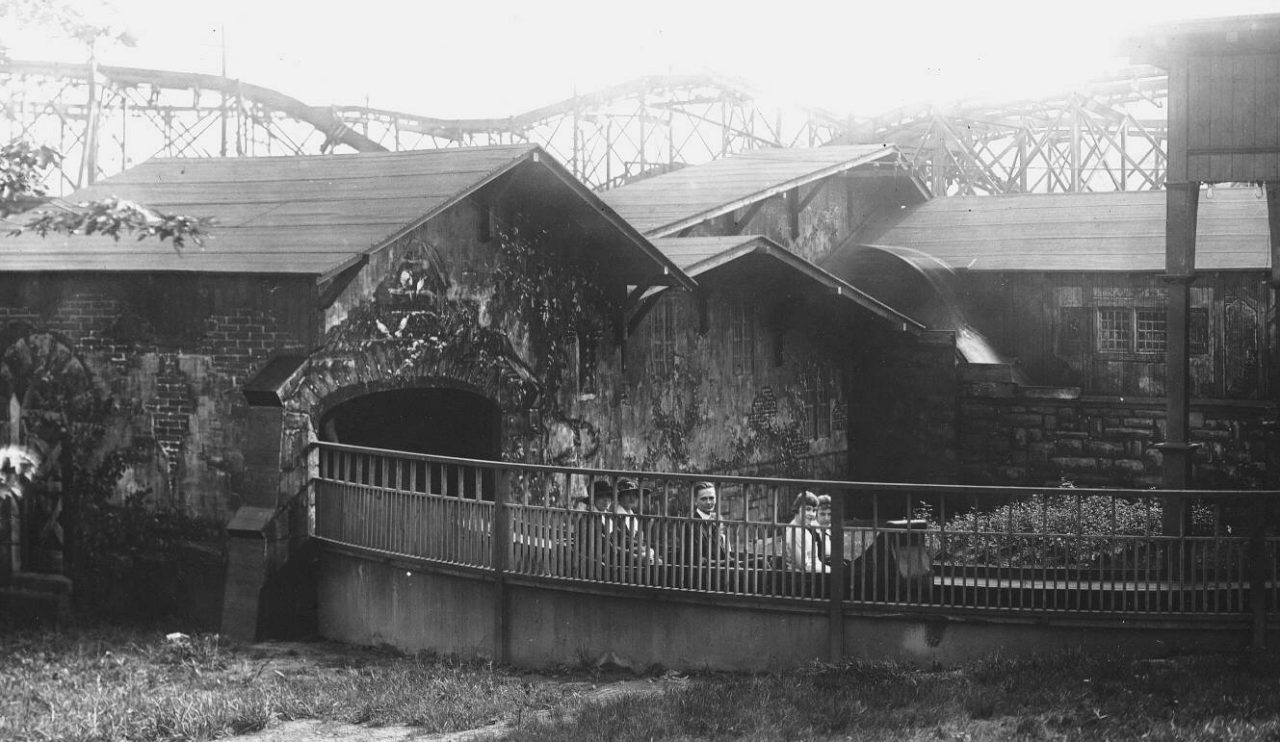 Perhaps no decade was as important to the Kennywood we know today than the 1920s. The Roaring 20s kicked off in dramatic fashion at Kennywood with the addition of the Jack Rabbit in 1920, our oldest surviving coaster. Designed by John Miller, the ride utilized a then-new coaster innovation - upstop wheels - found on virtually all coasters today. So no, the train does not leave the track during the double dip!

Other landmark additions continued throughout the decade, including the Pippin (1924), which was later converted into the Thunderbolt, and the (current) Racer (1927). Like the Jack Rabbit, both were designed by John Miller.

But the 1920s weren't just about the coasters! The Old Mill was completely rebuilt and a "modern" 16-car Whip was purchased. The Turtle (then called the Tumble Bug) arrived in 1927, alongside our beautiful, hand-carved Merry-Go-Round (the park's third). Designed by master carousel carver William Dentzel, it has 64 animals - 50 jumping horses, 12 stationary horses, a lion and a tiger. Also in the 1920s, the first Kennywood arrows appeared - used to direct traffic to Pittsburgh's thriving amusement park. 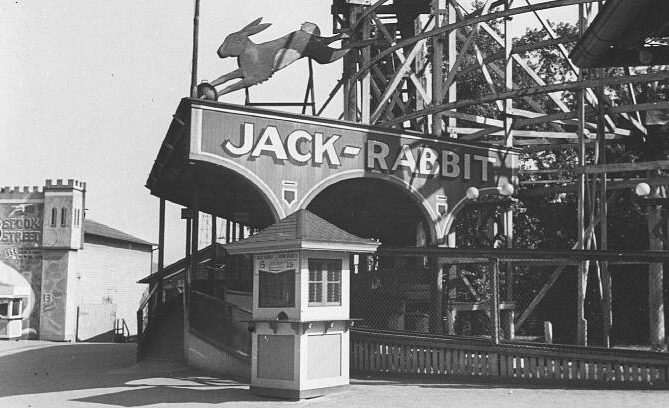 The Great Depression hit Kennywood hard, like so many other businesses. Yet Kennywood found a way to survive and even grow. The Auto Race - now the last ride of its kind - arrived in 1930. That same year, the Lucky stand was built near the Tumble Bug. Though the reason it was named that may be lost to history, perhaps someone guessed it would be a survivor. The Laff-in-the-Dark dark ride also arrived in 1930.

Growth slowed down during the worst of the depression, but even then, a few new things would pop up here and there - even if just a few new stunts in the Old Mill. Kennywood celebrated the end of the Great Depression in 1936 with the opening of Noah's Ark, now the last operating ride of its kind in the world.

Unfortunately, World War II would bring a new set of challenges. In an era when many parks closed forever, Kennywood once again survived. The park supported the troops by providing free ride tickets, and Kennywood became an area of escape for families during the harsh days of the war. Laffin' Sal arrived in 1942 to help lighten everyone's spirits with her nonstop hilarity.

The late-1940s brought a period of rapid growth, new rides and refurbishments. Kennywood added the Little Choo Choo in 1945, using engines from 1939 that are still in use today.  The Tumble Bug became the Turtle in 1948, when a sixth car - or should we say turtle - was purchased. 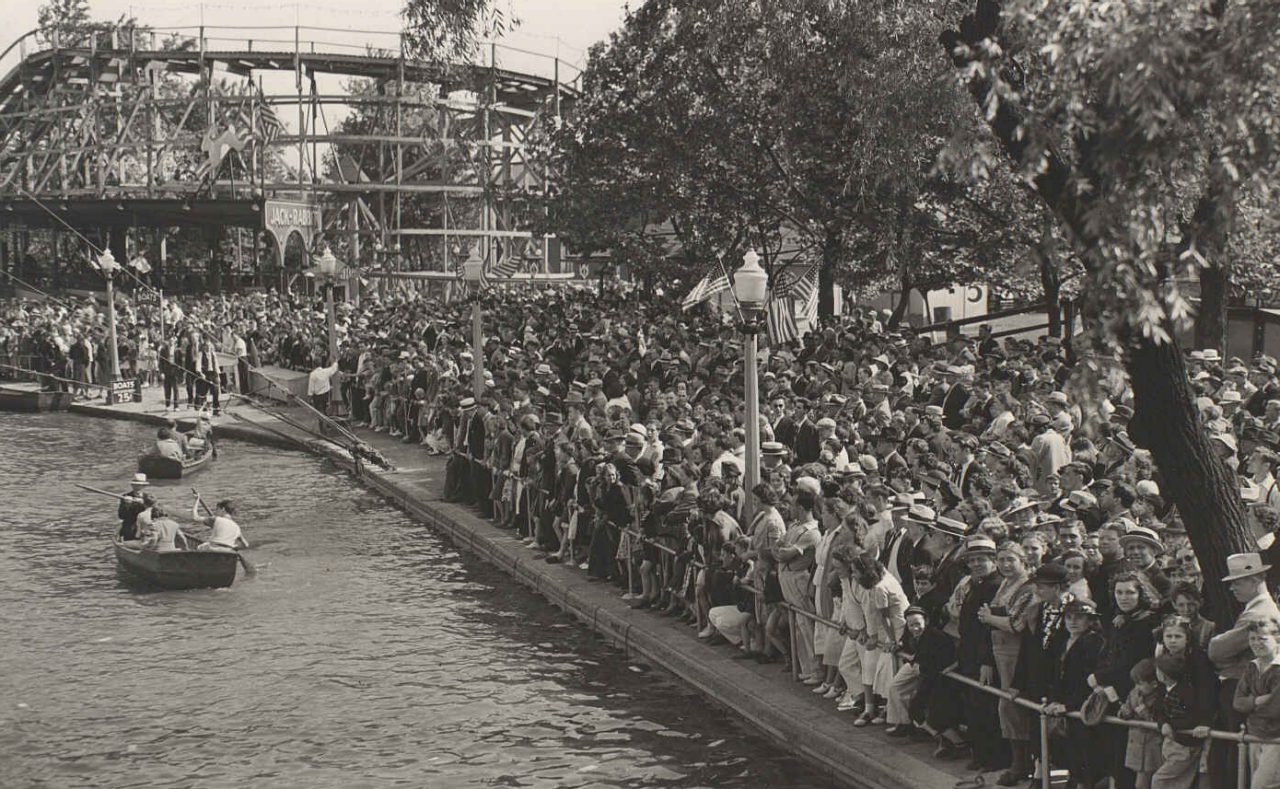 The 50s and 60s also brought competition from the rising popularity of TV and  the growth of national theme parks, like Disneyland. Kennywood decided to compete by adding the Turnpike, the park's first non-transportable ride, in 1966.

In 1968, the Andy Vettel created the legendary Thunderbolt rollercoaster by altering the old Pippin. The Pippin's ravine section and Century Flyer trains remained, with the middle of the ride altered to create a series of intense helixes. The ride was dubbed "King of the Coasters" by the New York Times in 1974, putting the park on the map for travelers across the country.

The 1960s came to a close with a complete renovation of Noah's Ark in 1969, when a large blue whale with a very squishy tongue greeted visitors for the first time. 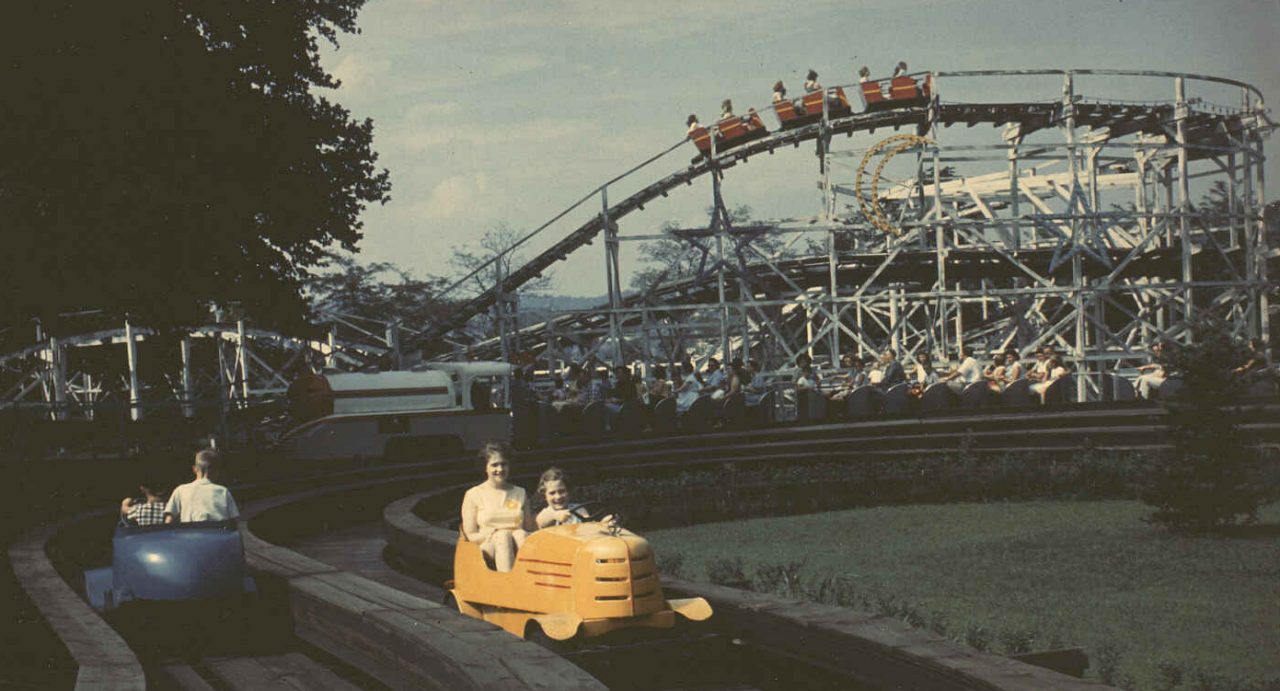 The 1970s were a time of change at Kennywood. Some traditions ended - the park's giant swimming pool, which opened in the 1920s, closed forever in 1973. The Ghost Ship dark ride - which was housed in the park's old Dance Hall - burned to the ground in 1975. Despite firefighters battling the giant blaze, the park roped off the area and continued operations. The Golden Nugget refreshment stand, part of the old Dance Hall, was saved, with patrons still enjoying its chocolate dip cones today!

Other new traditions were created: the Le Cachot dark ride opened in 1972, and the Log Jammer, the park's first million-dollar ride and first true water ride, opened in 1975. Potato Patch fries debuted in 1973 - now one of the most popular French fries anywhere! In 1974, our fun-loving mascot Kenny Kangaroo appeared for the first time.

Kennywood also grew by purchasing the nearby Idlewild Park in Ligonier in 1983, and the Kennywood team built and opened Sandcastle Waterpark in Homestead in 1989. Plus, you can't forget Rick Sebak's iconic WQED documentary Kennywood Memories, which premiered in 1988!

While Kennywood continued to move toward the future, the park cemented its legacy when it was named a National Historic Landmark in 1987. Kennywood is one of only two amusement parks to be honored with the highest-level historic designation offered in the United States.

Guests enjoy a Golden Nugget dip cone in the early 1970s. When the Ghost Ship dark ride (in back) burned to the ground in 1975, the Golden Nugget was saved - now home to one of everyone's favorite summer snacks!

Kennywood continued to expand in the 1990s - bigger and better than ever before! The record-breaking Steel Phantom rollercoaster debuted in 1991, which brought the records of world's fastest coaster (80mph) and the world's tallest drop on a rollercoaster (225 feet) to Kennywood!

The park's single-largest expansion ever, Lost Kennywood, opened in 1995. It was themed to an area you'd only find in Kennywood, presenting rides and architecture of days gone by - inspired by Pittsburgh's Luna Park, which closed in 1909. The Pittsburg* Plunge (spelled correctly) was the centerpiece, with the Wave Swinger and Whip also added to the new area. World-class thrills came to Lost Kennywood with the Pitt Fall (1997) and Exterminator (1999), an indoor spinning wild mouse rollercoaster.

Into the new millennium, Kennywood was ready for yet another new coaster. With declining ridership at the Steel Phantom, the park converted the iconic hypercoaster to the Phantom's Revenge in 2001, keeping and enlarging the high-speed hills in the first half of the ride while replacing the Steel Phantom's four rough inversions with new world-renowned airtime. Phantom's Revenge remains Pennsylvania's fastest coaster!

In 2007, the local families that had operated the park for more than 100 years sold Kennywood and its sister parks to Palace Entertainment, one of the world's largest leisure park operators. 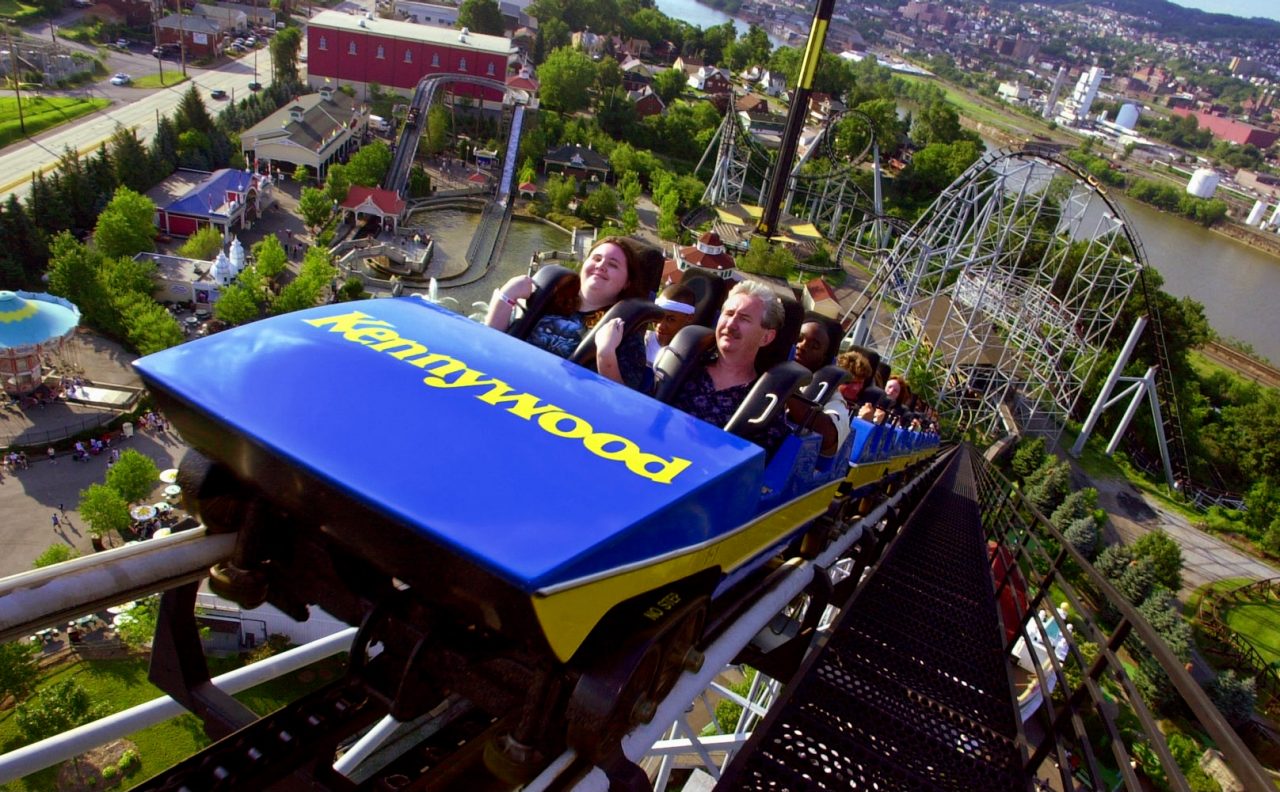 The record-breaking Steel Phantom in 2000, its final season before its conversion to Phantom's Revenge. Lost Kennywood can be seen in the background.

Popular new events also arrived at the park during this time. The Holiday Lights Christmastime event debuted in 2011, extending Kennywood's season into the winter for the first time! Both Bites and Pints Food & Drink Festival and Phantom Fall Fest debuted in 2021, with two new festivals coming in 2022.

Speaking of 2022 - this year, Kennywood prepares for its two-year, 125th Celebration - bringing with it park-wide renovations, improvements and upgrades! Also in 2022, the beloved Kangaroo ride returns, completely refurbished for Guests to enjoy for years to come.

Since the very beginning, Kennywood has prided itself of combining the best of the old with the best of the new. World-class thrills meet iconic traditions in an irreplicable way, providing truly unique Kennywood Memories for generations. The future is bright at Kennywood, Pittsburgh's Thrill and Entertainment Destination. 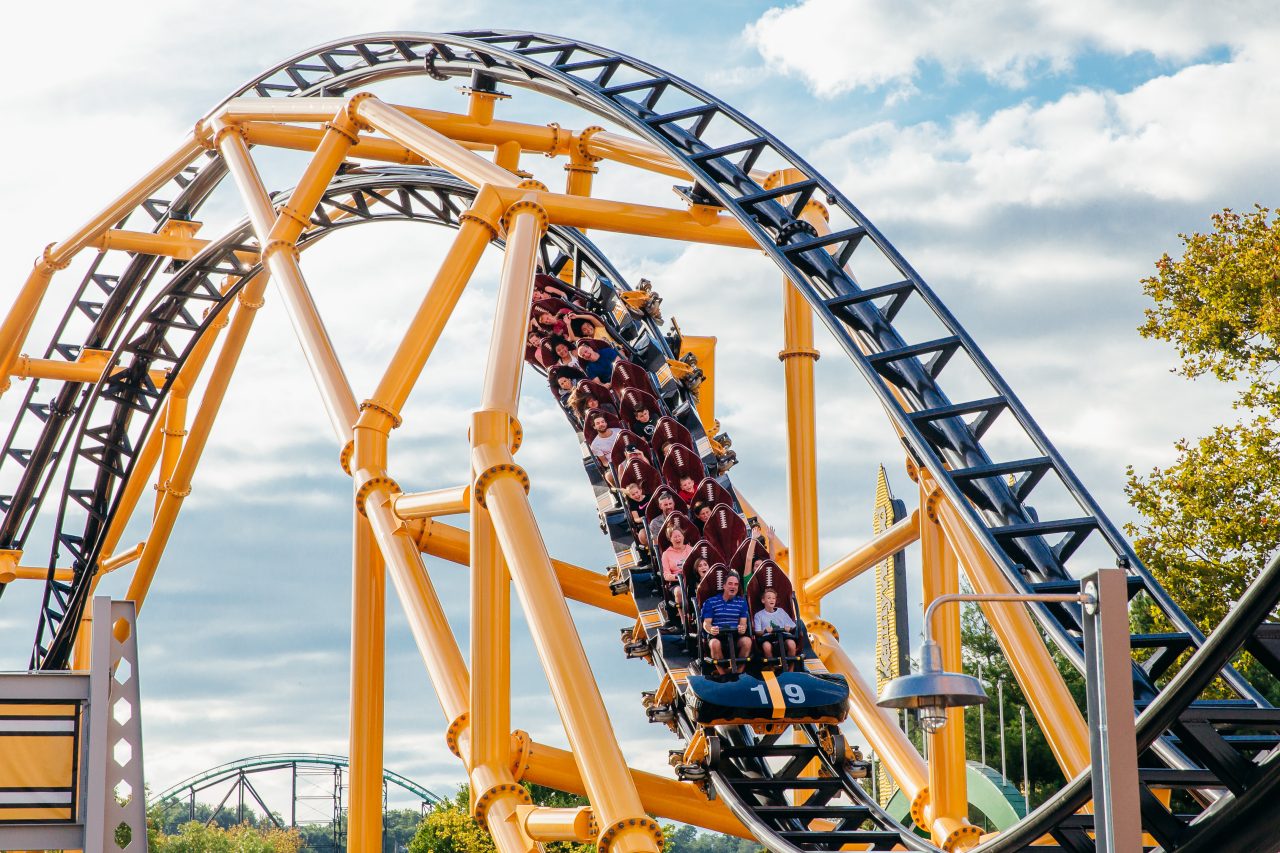 The Steel Curtain opened in 2019. The ride is the tallest coaster in the state (220 ft), has the most inversions in North America (9) and has the tallest inversion in the world (197 ft).
false
Health & Safety